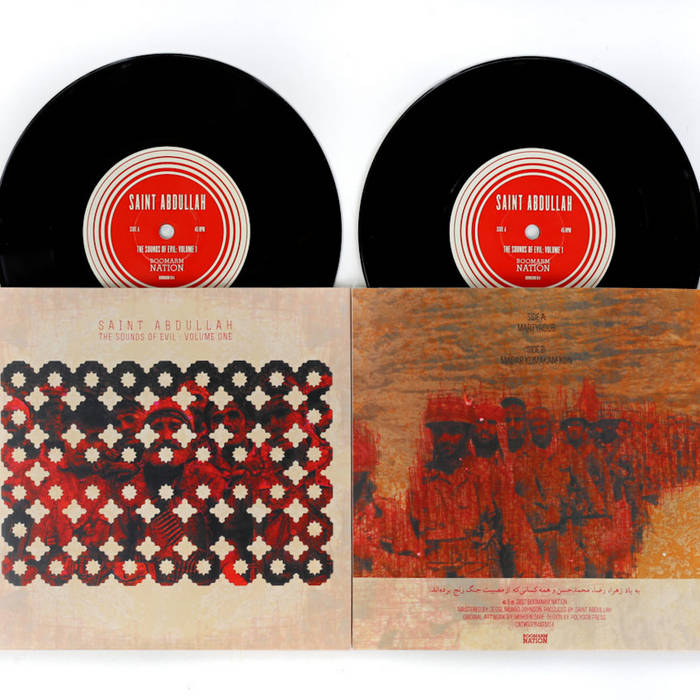 Thus Curated Kukushka dizzyingly dazzling that will make you (d)evilishly want more.
Love their other albums too, but this one resonates with me most as a complete work. Favorite track: Madar komakam kon.

LarryB2001 Great sounds and feeling, thank you! Do hope you'll have more out soon! :)

Saint Abdullah is a project by two Iranian brothers based in Brooklyn and Tehran, who create sounds largely inspired by the religious, political, and cultural history of Iran.

With The Sounds of Evil, Saint Abdullah passionately and unapologetically revisit the roots of their childhood in war-torn post-Islamic revolution Iran. These are family stories—of martyrdom, of loss, and of the tragedies of war, pieced together through aggressive sound collage, cultural sample archeology, and rhythmic structure.

Driven by spliced samples of the thundering sound of see-ne za-ni (ritualistic self flagellation or chest beating), the cry of Shia orators, distorted howls, vintage news clips, and a molten and pummeling pulse, Saint Abdullah twist and renew a sense of time and space. At once channeling and challenging these times that we live in.

This is political music, this is sacred music, and for most of us in the west, this is new music.

Raised in a conservative Shia Muslim family between Iran, Canada, and the UK, Saint Abdullah's most prominent exposure to music came from family visits to the mosque. Particularly during the holy month of Muharram, where Shia orators would lead mass ceremonies commemorating the martyrdom of Husayn, the grandson of the prophet Muhammad, in the Battle of Karbala in 680 CE.

For the two Iranian brothers, there's no question that Saint Abdullah formed out of a deep frustration with the way the West perceives—and treats Muslims and the Islamic faith. Their hope is that through music, they can help inform a larger inter-cultural dialogue—to build compassion in the way humans deal with issues surrounding race, religion, culture.

Bandcamp Daily  your guide to the world of Bandcamp

outré black metal, with a Victory Over the Sun interview and music from Liturgy and Jute Gyte.